I didn’t wake up until nine this morning

I didn’t wake up until nine this morning. I went to bed at eleven, which means ten hour sleep with two short breaks. But it was about time, the two previous nights I often woke up, the breaks were long and during the day I was tired and irritated. Yesterday, for example, I threw a slipper towards the TV, where some masked politician was promising a “better tomorrow”. Today is ok. It is because last night I made myself Prana from 5 liters, holding it in the 5th chakra and 3 times overhead. Before I explain what’s all this about, I have to mention that I’ve been doing this once or twice a week lately, as needed, and if not, I felt at least uncomfortable. My wife sometimes laughs at me: “You’re addicted to autopathy!” For her, it is enough once every two to three months to boil saliva and breath should a problem, usually a small one, appear. Like me, she’s been on autopathy for twenty years.

So, when I make myself Prana 2, I hold the vortex chamber with the diluted information from the 7th chakra first in the 7th chakra, then in the 6th. And also in the throat chakra, which applies perhaps specifically to me, because I have been overloading this part of the system, responsible for communication, for a long time with my lectures and literary activities. And then I hold the vortex chamber again in front of the third eye chakra and finally return it above my head for the third time. Two and a half minutes of flow through the bottle has proved to be good for me in the long run. But when I exceed three minutes, it has no longer the full effect and the same happens with only a liter and a half. Other people too have noticed that the potency of Prana needs to be stipulated relatively accurately by gradually increasing from the lowest dilutions and monitoring the feelings, and that there is no point in pushing it higher at any cost, as one client recently did, because then it doesn’t work. As for the third positioning above the head and its special effect, it was discovered by a client years ago, who spent 10 years relatively satisfied with autopathy but was forced to return to it every couple of months, until he performed spontaneously this third placement over the head at the end of the application – and then it lasted him a whole year to his full satisfaction and I did not hear from him anymore. For me, it only lasts 3 to 4 days at my age, but I’m grateful for that. And when I say at my age, I don’t just mean my biological age, but also the time I’m living in.

Our demanding times signal, as I perceive it, the end of the age of orthodox materialism. Materialists with their reductionist science (ignoring the subtle sphere of  a human) cannot cope today with people’s central problems. In principle, they proclaim that man and his mind and consciousness and health (= life) are created only by material processes, and that they can only be influenced by matter. But only a few people believe this materialistic sanctity. According to a new survey, among scientists only 25% are materialists, 25% profess traditional religions and almost 50% are non-materialists, more of our kind, sometimes called “new religiosity”, “new age” and the like, the label is irrelevant. Many of them do not find notions like prana, meditation, consciousness influencing or creating matter and similar things foreign. However, they cannot communicate their beliefs, at least not at work. The religion of the state, the academia, the corporations, is materialism. However, it has a declining number of believers.

It is wonderful to feel the relief after transferring creative information from the 7th immaterial chakra to the body system. And twice as nice is the realization that this essential part of a person is outside the physical body, it is the part that does not die, it changes, but goes on living, even after leaving the body and then with a new body. It is not subject to a state or corporate philosophy. It is useful to realize that this implies responsibility for what we do and how we think. Buddhists call it karma. Materialists promise that redemption from suffering occurs automatically through the death of the physical body, irrespective of whether one had been good or bad. According to them, nothing but the body exists. However, according to a sociological survey, there are only about 17% of them in our country, for example. They deserve compassion, as do all of us. They would probably also benefit from making themselves Prana 2, 3x over the head…

Many civilizations before us knew how to transmit subtle information from that eternal part of man to that transient one through water and they functioned longer and more sustainably than ours, whose transformation is probably just around the corner. It was the happy Minoan civilization in Crete, lasting a thousand years without wars and using water vessels Rhytons, it was the time of the Upanishads in India, where  “The Kundika Upanishad” came from, it was the first one and a half millennia of Buddhism, where the Kundikas, vessels for flowing clean water, were also used. These periods remind us that it can also be done differently, with a broader and kinder view on human problems.

Illustration photo: Kundika in the museum of a Buddhist monastery in Sri Lanka. It looks familiar. 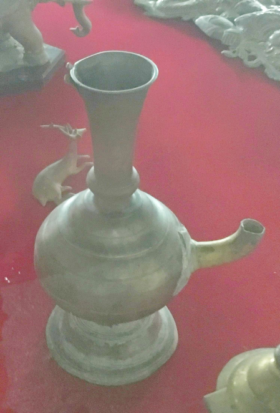