Home » Articles and videos » I am grateful for joy

I am grateful for joy

A contribution from the VIII Conference on Autopathy 2016 in Prague 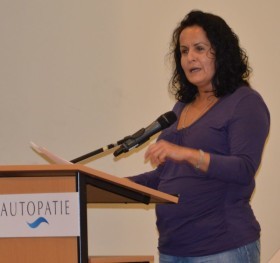 I got to know autopathy at the end of the last year, when following total psychic exhaustion. I was in bed with the inflammation of the middle ear, symptoms of starting pneumonia and a feeling that the battle, which I have been fighting for so many (20) years, is becoming meaningless.

Besides the rather acute condition in which I was, I had been fighting for over 20 years with drug addiction. Although I have been stable for around five years, my battle of resisting and coping with stress situations continued and was very difficult, because the opponent was very strong indeed.

My addiction and the subsequent attempts to heal it, brought with it states of anxiety, depressions, insomnia, mood changes, mania, various neuroses, stomach discomfort, lighter forms of phobias, overeating, increased nervousness (which I responded to with increased doses of nicotine – 40cig/day), etc.

I am aware that the permanent disquiet, which I felt, was for me a very natural part of life and although I did not feel comfortable with it, I felt considerably better than at the time before I stopped taking drugs. But I felt empty…

That, which I feel now thanks to autopathy, is unbelievable. The battle had ended. The eternal anxiety and fear of failure were replaced by feelings of joy and happiness.

When I had to stay in bed with fever last year, acquaintance had brought me oranges, the autopathy bottle (AB) and the book Get Well with Autopathy. I should read it and tell him what I think about it. I realized that I have already heard a mention of autopathy in the distant past, but I did not know anything about it. And so, I began to read. And because I am impatient and from my point of view, the book was much too long, I played the video with instructions on how to use the AB. Then I went quickly to the nearby Chinese store and bought two bottles of spring water and with a telephone on my ear, I took the bottle out of its packaging, very enthusiastic to try it. In my impetuosity and desire to be immediately healthy, I have of course overlooked important information about the need to keep to certain rules in applying the AB and over the telephone hurled all sorts of information and questions at my acquaintance.

Unwillingly, I had to hear how undisciplined I am and with the recognition that I should not expect any miracles I went to bed again. I used the dilution 3 litres and saliva.

In the afternoon I felt much better and so in the morning of the next day I applied autopathy again. The symptoms began to subside and I felt better and better.

About one week later I realized that the improvement, which I perceive, is not only on the physical level. The first thing, which I registered, was that in the morning I was looking forward to autopathy. I started to get up with more joy. And so I continued with autopathy every day. After about two weeks I realized that my chest is beginning to fill with joy. A feeling, which I hardly remembered anymore. At the beginning, I was so surprised that I did not know if I should connect it with autopathy or with some chance. Today I can confirm that autopathy made a miracle with my psyche. The psychic problems improved 90%.

Right now, I am starting the third month with autopathy and am completely fascinated. Besides the problems, which I mentioned, in my enthusiasm I have left out one important thing – about five years ago, I discovered a lump in my breast. Thanks to the family anamnesis and my lack of knowledge at that time, I have contacted my gynaecologist and I probably do not need to describe the merry-go-round that this started. Totally confused and shocked by the doctors´ attitude, I have in spite of their conclusions decided against systemic treatment and tried all sorts of things possible and also impossible, to get rid of this thing. Sometimes I had the feeling that it gets better, but then it always went back to its original state. Each time before menstruation and during any kind of stress, the lump had so to say inflated. In a few years, it got of course considerably bigger.

As I have already mentioned, thanks to autopathy, I began to feel joy. And I feel it more and more. When I recovered from my illness in December and I remembered again that I also have the lump in my breast, I said to myself that this could be a way out. Already then, when I touched it, I felt a change, but I did not know, whether if this was not only my wishful thinking and so I rather left it. I continued every day with my 3 litres and saliva and felt great. Then, I remember, I left autopathy out for one day and did not feel right in my skin anymore. Autopathy really works with the spirit. I am absolutely sure about this.

Sometime at the beginning of January, I tried to boil the saliva and to add 1,5 litre water. From this day onwards, I have regularly woken up at 23:00 and stayed awake until 03:00. This had made me a little unhappy. Before I realized I could try returning to the initial 3 litres and non-boiled saliva. It worked wonderfully.

So, meanwhile, I have been continuing in the way, which I started and I feel indescribably better. The lump is roughly 1/3 smaller and decreasing and I am grateful for it.

However, I am even more grateful for the joy, which I feel inside me again. I remember this feeling well from childhood, when I was running around a meadow and was a fairy.

I do not know how this was possible and I do not search for an explanation, I only feel this endless gratitude. For the life itself. For that, that my enemy, with which I fought for more than 20 years, loses his power over me.

Mr. Cehovsky said that autopathy does not work with the physical body, but with the fine-matter one, and he is right. But, if he did not say it, or if I understood it wrongly, then I say it now. Autopathy repairs the spirit and this is perhaps the greatest possible miracle and a gift.

I wish you all to experience on your way to health that, which I experienced, and I would like to humbly advise you not to skip any chapters in the book (especially the one dealing with the correct preparation of autopathy).