Home » Articles and videos » Autopathy for the improvement of sports performance

Autopathy for the improvement of sports performance 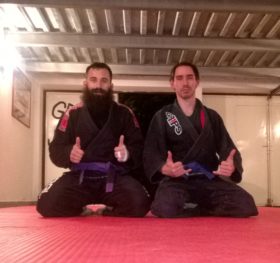 On the left the author of this article

I will outline here several cases of my clients, who have decided to use autopathy as a means of improving their athletic performance, achieving better results in competition, speeding up regeneration after the demanding daily training or in healing injuries, to which athletes are particularly vulnerable compared with the physically inactive population. Of course, autopathy also helps them in curing protracted chronic problems that prevent them in achieving their goals. Some of these clients practice sport in the top league, others as performance sport or for recreation.

A man about 35 – 40 years of age, has been training regularly for many years martial arts, namely Japanese jiu jitsu, in which he holds a black belt.

He contacted me for a consultation in the summer of 2016 due to protracted, ever present health problems. This was mainly chronic rhinitis, occurring every day for 7 years, which has been reducing his breathing capacity during exercising.  His other health problem was pain in the lumbar area, probably related to a diagnosed inflammation of the hip joints. This hinders him strongly during training, he is not able to carry out leg striking techniques. During each training he has been experiencing a considerable discomfort, to which, as he says, he got used to a bit.

I recommended to him the following doses:

During the follow-up control six weeks later we discussed the development up to now. When using the lower potencies, he had undergone detoxification states demonstrated by increased frequency in passing stool and a short appearance of an unusual rush. The primary problems lasted until the moment, when the dilution had been increased to 7,5 l. The rhinitis improved by 80% – a new experience after 7 years of the existence of this problem. He feels better then before concerning energy and condition. Pains in the hips and loins are slightly better.

Due to the resonance with the vital force which arrived at this level, I have recommended for the coming period of two months to stay at 7,5 l , 1x a week (to alternate boiled breath and non-boiled breath in weekly intervals), adding that should after a couple of weeks the condition stagnate, he should increase to 9 l.

During the follow-up control he reported that he had increased to 9 l. The rhinitis which he had 7 years had completely disappeared and had not come back. The hip joints got much better on this potency and during the training he can train the techniques much better. Thus autopathy helps him to function in full training effort, whereby the health condition had ceased to be a hindering factor.

A case, which demonstrates, how the dilutions from non-boiled breath help with coping with excessive physical strain. 35 year old man, family father, owner of a prospering company and performance athlete with fondness for running long distances, competes in marathon. He told me during the initial consultation that he is physically fit and nothing serious bothers him, now and again has a cold, but that be has been having much stress at work connected with large workload, which has often adverse effect on his training performance. After sport performance, he has been having pains in the lower back, although who does not after having run tens of kilometres every week. However, he does not see this as being a large problem. His requirements and expectations were the following: he wanted autopathy to help him with psychological coping ability in stress situations and at times of feeling generally worse in terms of energy and physical fitness. He has been running daily and does not want to miss any training, which might then hinder his preparation for a competition.

In our next consultation, when he had made an exceptionally vital impression on me, we have agreed that he will try autopathy from non-boiled breath in the potency 25 l to start with and that he will apply it at least 1x a week. He should not hesitate to increase the potency further. Because from Moravia he has a long way to Prague, the subsequent communication was continued per Skype.

Several month went by since our first consultation and we had several follow-up consultations, in which he wanted to make sure that he has been dosing the autopathic dilutions correctly. He has been gradually increasing the dilutions and now he is at a level of 25 minutes under the filter, which corresponds with 50 l flow-rate through the bottle. He has been very consequent in the preparation of autopathy, its frequency according to need, during times of reduced energy and and after intensive training, always from non-boiled breath.

During the last consultation in January he told me that he is full of energy and has a feeling that this condition is more stable now then it was with lower potencies and that he has been therefore applying autopathy less and less frequently (higher potencies have a longer effect). He feels in an unusually good condition – physical and psychological.

I have my own personal experience with autopathy, also in connection with healing a post-injury condition. I have been practising performance Brazilian Jiu-Jitsu, which is a form of martial art and also sport, focusing mainly on the control of the opponent through pins, joint locks, and throws. It is physically very demanding activity, during which I meet at almost every training with colleagues with some form of injury in the form of muscle strain, muscle bruising and sometime even bone fractures. Some of them use autopathy.

Until recently I have held the opinion that as long as the person is vital, has energy, then in the case of similar injuries it is not necessary to use autopathy, the body is capable of dealing with it itself, without outer stimulation. Nevertheless, I could not ignore several situations, when I had been injured and after the application of autopathy the healing and also the return to the training process was much faster, more fast then I could have expected it to be without the help of autopathy.

I could describe many such situations, from which one of them, three weeks old, is very alive in my memory. After sparing I had an injured hip and for two days I could not walk at all without support, and the following three days only with difficulty. The condition has not been improving. After these five days of pain, caused by the fact that I did not have a filter at home and could not prepare the autopathic dilution, I finally made the dilution with 50 litres from non-boiled breath. The following day I started to walk normally and the day after I was able to do a full training. Furthermore, on the second day after the application, two unexpected and positive things took place in my private life, without my taking action. As I know from my consultancy work, this was not  a coincidence, but an unbelievable resonance on the level of the 50 l from non-boiled breath, which took place thanks to the better tuned, some people would say connection to the so called collective conciousness.

In relation to this sport theme I must mention an email, sent to my father from the USA, In which the author, a woman, writes about her experiences of making autopathic preparation directly from her exhausted breath after performance sport. I quote:

“I joined a boxing gym in January and would get quite winded with the high intensity drills.  In early June, I decided to use my labored breath for the preparation (I jumped rope for 15 minutes) and I noticed immediate improvement during my next boxing workout.  In addition to having more controlled breathing, I also noticed my mind was sharper and I could keep my eyes focused intensely on the bag.  Now I can participate in the exercises with even more vigor as my lungs fully support my engagement.

Another time I noticed going up our attic stairs in very hot weather was exhausting, so I went up/down the stairs during the heat of the day 6-7 times and used my labored breath from this exercise to prep the autopathy bottle and now I can easily go up the stairs in the heat without exhaustion.

Our son asked my husband and me to join him in a 10 mile race in October.  I am using my breath as a prep after every running practice (4/week).  I contribute my quick stamina development to the autopathy treatments.  Sinus drainage would limit my nasal breathing when I first started training (early June) and now I can inhale and exhale via my nose the entire run as I no longer have sinus congestion.”

Her whole email has been published at Autopathy.info under the title  The creative uses for autopathy are endless.

I have a whole row of cases of athletes, who use autopathy for the improvement of life quality and mainly their sport achievements. They cover a large scale of sport disciplines, to name a few: competition gymnast, professional hockey player, cross-country contestant, etc.

I also cannot leave out a case of my colleague Matyas, also publisheed in the website of autopathy.info, with the title Ulcerative colitis and autopathy, where he describes in detail how illness had hindered professional athlete’s progress in his career and made it impossible for him to train fully. After the autopathy therapy and the subsequent cure, he was able to fully concentrate on his training and performance and received engagement abroad.

I have already published in the web a similar, successful case with similar diagnosis in a woman professional volley-ball player under the title Healing ulcerative colitis, autopathic dilution from stool and prana.

These two were however primarily cases of healing of chronic disease. In this article, I intended to highlight mainly the benefits of the autopathic dilutions from non-boiled breath for the increase of athletic performance, for regeneration and after sport injuries.