Home » Cases » How a guinea pig brought my daughter to autopathy

How a guinea pig brought my daughter to autopathy

A contribution from the Conference 2017

I started to use homeopathy 25 years ago, after a drastic and ineffective therapy. It is my favourite method. But it is not a simple one. Two years ago, I encountered autopathy, which impressed me by the fact that I work with my own information. I started to apply boiled saliva, boiled breath and prana. Gradually, I have introduced this method to the other members of the family. Only my 18 years old daughter, who has been having big problems with menstruation, continued to maintain that she is not a charlatan and will not do this conjuring of mine. It went so for about a year. Since her 14th year of age, she has been having irregular menstruation with vomiting and pains lasting two days, which can be relieved only by strong addictive analgesics. She cannot go to school during this time and it restricts her a lot. In spite of this, she refused autopathy. 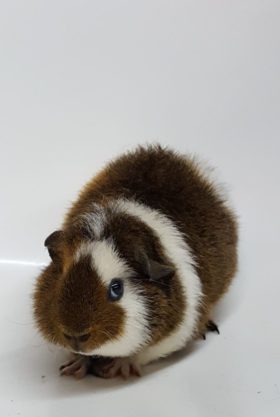 A half a year ago, her guinea pig got ill. Its respiratory system was attacked by a bacteria, an incurable condition, which slowly kills the animal. The veterinary medicine has no cure for it. They can offer only antibiotics, which would kill the guinea pig anyway, because it is very sensitive to it. I was considering how to help and I said to myself that we try autopathy.

At the last year’s spring seminar in Sec I have learned how to take specimens from infants. To leave the bottle in the fridge, put it to the nose, then pour water on the condensed drops and make autopathy. I put on a mouth and nose cover and gloves and took a specimen of the guinea pig’s breath, boiled it, poured 0,5 l water through the bottle and put a few drops of the resulting dilution on its muzzle. I selected a low potency and waited. At this time, the guinea pig had swelling of the respiratory ways, fever and water on the lungs. It drank a lot to cool the swelling and it stopped eating. The veterinary doctor expected quick end. The day after autopathy the guinea pig looked better, the temperature went down, it stopped drinking so much and started to eat. The cough had gradually decreased. I repeated this procedure several times. Half a year later the guinea pig is alive, which the veterinary doctor thought impossible.

After this experience, my daughter became interested in autopathy. She started with boiled saliva 0,5 l and then 1 l. Gradually, we transferred from saliva to non-boiled breath. There we started with 0,5 l and currently we are at 1 l. The menstruation is becoming regular. The pain is no longer so strong and vomiting only sometimes and then 1x. In spite of these low potencies the body reacts. Since her birth I have been trying to use mainly homeopathic remedies and so she has not been polluted by chemical medicaments. I am confident that this is the reason that her body can react also to low potencies.